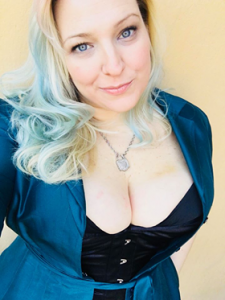 Dawn Marie had the good fortune to meet two other Kinky Femme’s who were all too happy to introduce her to the Leather Community in 2005. Immediately, it felt like home. Since then she has served as Miss Philadelphia 2005/06 where she was the bar-pretender for “W.E.T.” – Women Entertaining Themselves, a women’s bar night at the Bike Stop. In 2006, she was honored to be a part of the ABW Family as the American Leathergirl . During that time one of the highlights of her title years was emceeing Leather Pride Night in NYC, with Will Clarke, in the moments when Jo Arnone had to stop and take a breath.

Submission and a slavegirl identity are a big part of Dawn Marie’s Leather heart and she is grateful for the dynamics that she had the opportunity to explore over the years. Since making the Mid Atlantic region her home in the Fall of 2014 she has focused on serving and supporting the Mid-Atlantic community and was honored to be a finalist for a Pantheon in 2016. Dawn Marie is one of the founding members, of the Mid Atlantic girls of Leather and has had the privilege of emceeing for events such as Mid-Atlantic Leather Woman, NJ Leather, Philly Fetish and the first Women of Drummer contest. She is excited to now be hosting “Evoke, a queer play party for those who are” at the DC Crucible every trimester.